In Somaliland’s capital city of Hargeisa this month, forensic experts are opening 38 boxes of human remains. The men inside died in the late 1980s, victims of a brutal counterinsurgency campaign launched against the separatist Somali National Movement by Somalia’s Siad Barre.

Somaliland ultimately declared its independence from Somalia in May 1991, after Barre was overthrown and the victorious alliance of rebel groups fell apart. Since then, the Somalilanders have pushed unsuccessfully for recognition as a sovereign state. For nearly 23 years, they have self-governed, printing currency and issuing passports, providing social services and security. While Somalia descended into anarchy, Somiland transitioned to a peaceful multi-party democracy. But the 3.5 million Somilanders are still nominally citizens of Somalia.

Hargeisa continues to lobby for international recognition. If they get it, one of their priorities will be to pursue accountability for the atrocities committed by the Barre regime.

Siad Barre seized power in a military coup in 1969, nine years after the Somali Republic was formed through the merger of the newly independent Italian and British Somalilands. Barre renamed the country the Somali Democratic Republic, and set about implementing scientific socialism and eradicating tribalism. Things began to go south for Barre in 1977, when an ill-conceived effort to reclaim the Ogaden region from Ethiopia led to the loss of Soviet military support.

Following the disastrous Ogaden war, dissatisfied military officers from the Majeerteen clan launched a coup attempt. Barre responded with a vicious crackdown, deploying his presidential guard, the Red Berets, along with the Victory Pioneer militia. Together, these forces were responsible for terrible abuses in Majeerteen territory, including mass rape of clan women.

A brutal repressive apparatus was thus firmly in place when members of the Isaaq clan formed the Somali National Movement and began attacking government installations from bases in Ethiopia in the early 1980s. A state of emergency was instituted, and a policy of “Isaaq extermination” announced. A mobile military court known locally as “Guilty or Innocent, You Will Be Found Guilty” (!) was set up to try suspected dissidents, while a newly created secret police force, the HANGASH, terrorized the population. Arbitrary arrests and detention, torture, rape, and extrajudicial killing were widespread. Mass graves uncovered by heavy rains in 1997 provide evidence of the systematic execution of civilians suspected of supporting the SNM.

Despite the heavy toll exacted on the Isaaq civilian population, the Barre regime was unsuccessful in undermining the insurgency. However, in 1988, the Somali and Ethiopian governments resumed diplomatic relations, issuing a joint communique in which they agreed to stop committing “acts of destabilization against each other”. The SNM read the writing on the wall and exited Ethiopia, moving to seize Burao and Hargeisa. The government’s response was swift and merciless, beginning an indiscriminate aerial bombardment campaign that killed thousands of civilians in Hargeisa alone.

Africa Watch (now Human Rights Watch) estimated in 1990 that 50,000 to 60,000 unarmed civilians were killed by the state security forces between May 1988 and March 1989. Somaliland’s War Crimes Investigation Commission now claims that approximately 200,000 civilians were murdered by the Somali government during the 1980s. Although more conservative estimates put the total in the tens, rather than hundreds, of thousands, no one disputes the occurrence of mass death, or the deliberate targeting of civilians.

In 2012, a U.S. federal court awarded $21 million in damages to Isaaq victims of the Somali regime in a lawsuit against former Minister of Defense / Prime Minister Mohamed Ali Samantar. The case, which was brought by the Center for Justice and Accountability under the Alien Tort Claims Act (a U.S. statute that allows aliens to sue in U.S. courts for human rights violations committed abroad), is the first time that anyone has been held accountable for the abuses of the Barre regime. Unless and until Somaliland’s statehood is recognized by the international community, it may be the only time.

*Photo of Hargeisa’s memorial to the victims of the 1988 bombings from Wikimedia Commons.

Remember that time Somalia decided to arrest and imprison a woman who accused members of the police force of raping her? Sure you do. And remember when they also arrested the freelance journalist to whom she’d told her story, along with her husband, and the two people who had supposedly introduced her to the journalist?

Well, today she was convicted of the crime of “insulting a government body,” and sentenced to a one-year prison term. Abdiaziz Abdinur Ibrahim, the journalist (who, mind you, never actually published any details of their conversation), was given the same sentence. Her husband and the two intermediaries were acquitted.

You might be thinking that Somalia, faced with the daunting requirements of establishing itself as a functional state, has decided to start small by learning to protect itself from rape victims and unpublished freelance journalism before moving on to, say, evicting violent terrorist groups from its territory.

But we figure Somalia is actually pursuing a more sophisticated strategy, and attempting to position itself not only as a for-reals-we-mean-it-this-time-actual-state, but also as the first official destination for men’s rights tourism. We can see the ad copy now:

From the six month old Federal Government of Somalia, a step-by-step primer on how to undermine your fledgling regime’s “please help us have a country” PR tour:

All in all, a process guaranteed to make donor countries look at your security forces and think “State capacity is the best. Let’s send these guys some more money!”

Biggest merger since peanut butter and jelly? I think we all saw both these coming.

I’ve thought about this a lot so I’m glad someone decided to write about it.

I’ll leave you all with a (rare) happy ending this week. We got a tip from Kim Yi Dionne earlier today about Ralph Kasambara, a political prisoner in Malawi who was being held in what are terrifyingly called “condemned cells.” Deets are here. But, in the time from when we got the tip to now, “a Judge has issued a High Court Order for the immediate release of Ralph.” Now, let’s not forget to knock on wood, but this actually sounds like good news. Don’t get used to it…

Don’t worry, guys. I’m back and I only missed three of the four fist fights in the Somali Parliament.

Looks like the Justice Department, after 85 years, has finally gotten around to broadening the definition of rape. Unfortunately, some commenters on CNN took this not as good news, but instead as an opportunity to make “cougar” jokes.

Lastly, let us not mourn Kim Jong-il, but instead look back at the good times.

Why in the world would you wanna make this your issue? Even if it’s just meant to be part of a broader deregulation platform, this is now your issue. Congrats. (Hat tip to Aleksandra!)

Are donkeys under the jurisdiction of the ICC?

Paul Biya re-“elected” in Cameroon, gives him a reason to get out of Switzerland for a little while.

This is just all sorts of fucked up. Depressing that al-Shabab dressing up its own dead soldiers in AU uniforms, decapatating some of them, and displaying their bodies is the best case scenario here. Wow.
From Eric Margolis: “If Gaddafi was indeed behind the aircraft bombings, as most of the world believes, then he deserves not one bit of sympathy from us. If not, then we should at least acknowledge him for building modern Libya.” Right. So if he didn’t do these two bad things, we should forget all the other bad things, and, logically, give him credit for “building modern Libya.” Guess that’s the only available option. I wish I had met the guy like you so I could have figured all that out sooner. There are some other gems in here like “I still can’t figure out whether Gaddafi was really hearing voices that guided him, or just having adolescent fun scandalizing and frightening the world.” Again, I don’t really think those have to be the only options I get to pick from. You guys at home can parse through this drivel for some of the other astounding inconsistencies, but really, the point I would like to make is that you can oppose the foreign military intervention in Libya, criticize the NTC, and even recognize the good things Gaddafi did without resorting to a complete character revision of a fairly shitty dictator. Criminalizing homosexuality, executing political opponents, and suppressing freedom of speech are not actions of a man who was simply “eccentric,” “odd,” or least of all naive. They are actions of someone who was probably psychotic and definitely strategic in his efforts to remain in power and enrich himself and his family. I’m not gonna accuse you of forgetting that, Eric, just of pretending to. Also, for someone who knew him so well, you spelled his name wrong.

Props to Hugo Chavez for his Yul Brynner reference. No props for saying he’s gonna rule for another 20 years. Give it a rest, dude.

Medvedev planning to rap about the budget.

Somalis can apparently now thank members of the Kenyan government for putting al-Shabaab between them and their samosas (perhaps inadvertently).

Was the UN calling for a temporary cease-fire before? Well, that would explain a lot…

Some good news from Somalia, and bonus, it’s about lions!

Katharine Houreld of the AP reports today that Somali authorities, in an unusual show of state capacity, have rescued a pair of rare Berbera lion cubs from being trafficked abroad.  This is the first time animals have been confiscated from smugglers in Mogadishu.  Apparently, the port manager noticed the baby lions aboard a ship and reported their presence to an organization training AU peacekeepers, which is now housing the cubs and keeping them supplied with tasty goat snacks.  So: go Somali government.  Way to do a thing!

And, because it’s totally relevant, here are some lion cubs I saw last spring at the Bronx zoo (where you probably shouldn’t go until they track down that poisonous cobra). 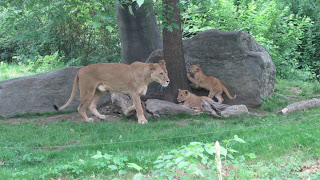