The Obama Administration has announced the list of countries that will fall within the remit of Special Envoy to Southwest Asia and the Gulf Dennis Ross.
Oh, wait, no. They held a press conference to announce Ross’s appointment, but apparently the briefer accidentally left the exact list of countries in his other pants. But that’s okay, because he has come up with an awesome fun way to figure out which countries are on the list: the reporters can guess! And he will tell them if they’re right. (Maybe.) But it’ll be fun, like a camp-out! So let’s play:
Reporter: Does it include Iraq?
Briefer: Indeed it does!
Reporter: Does it include parts of the Middle East?
Briefer: Getting warmer….
Reporter: Does it include Israel and Syria and Jordan and…
Briefer: *Blows whistle* One guess at a time, please! But since I like your tie, I will tell you that the list includes a region, which might include some countries.
Reporter: Oh, well, if it includes countries….how about Morocco.
Briefer: *Stares in stony silence.* (Had been planning to use State Deptartment’s cunning transfer of Morocco from typical African location to Southwest Asia as tie-breaker round.)
Reporter: Is this issues-based? So, could he be dealing with Morocco, and Algeria?
Briefer: Damn you reporters and your questions! It is almost as if you elicit information for a living!
Reporter: How about Somalia?
Briefer: Uncle! UNCLE! It includes all countries that make Special Envoy Ross feel sad and angry inside! Algeria! Somalia!
All Reporters: *Shocked silence.*
(Long pause.)
Reporter: How about Kyrgistan?
Briefer: Huh? What? Iran? Why would you ask about Iran? I don’t know why you would even bring UP Iran. I don’t see why Iran is relevant to anything.
Reporter: Um, actually I said “Kyrgistan.” It was kind of a joke, you know, because everyone knows that’s in Central Asia? And so I figured it couldn’t possibly be in Southwest Asia, and I was trying to cut the tension…
Briefer: Oh. Right. I mean, duh. That’s why I gave you my funny punchline about that other country, which isn’t relevant at all to this discussion. Because we definitely didn’t make up a region of the world so that we could appoint an envoy to Iran without telling anyone. That wouldn’t make any sense! No, he’s totally the Special Envoy to a secret list of Asian countries that includes Algeria. And also Kyrgistan, since you brought it up.
Reporter: So, speaking of Iran….
Briefer: Strategy! Regional ambassadors, advice, advisement, consideration…geographical narrow broadened timing time-frame actionable action not. Framework. Workable frame. Executive execution goal-oriented item.
Reporter: Are you okay?
Briefer: Glad I answered all your questions! And that I didn’t mention Iran at all, because it isn’t relevant to anything! See you later! We should do this again some time!
(Note: this transcript was bastardized from the closer-to-reality version that I found over at Abu Muqawama, itself an annotation of the actually-from-reality version here. Let’s just say my transcript is “correct” the way that Morocco is “in Southwest Asia.” I highly recommend reading Abu Muquawama’s whole post, which concludes that Ross is actually the new “Special Envoy for Iran, and assorted places where they get in our grills.”)
HT: Abu Muqawama. Further coverage here, and here.

Following last week’s reports that the Thai government had been forcing hundreds of Rohingya refugees into unsupplied boats and setting them adrift in the open ocean, and that its navy had beaten dozens of refugees as they lay bound and helpless on a beach in full view of visiting tourists, the local represtentative of the UN High Commissioner for Refugees asked to visit 126 Rohingya currently in custody.
The 126 were rumored to be the survivors of a group of approximately 1000 people who had previously been towed out to sea and left to die. Some of these were rescued by the Indian navy, but as many as 500 are believed to have drowned. UNHCR was eager to interview the survivors who had returned to Thailand, to determine whether they were being ill-treated, and also gather more information about their initial abandonment at sea.
The Thai government refused, (probably because they were ill-treating the survivors, and had previously left them to die at sea), initially saying that the Thai Senate’s Human Rights Committee would have to debate the matter first. The committee must have debated fast, because this morning brought a statement from the government that the 126 people had already been “escorted to the sea.” No word on whether this escort included seaworthy boats, food, or water, but I suppose there’s a first time for everything. 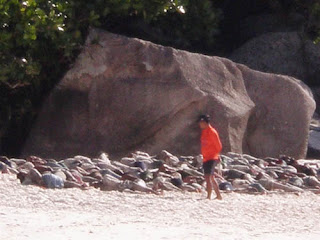 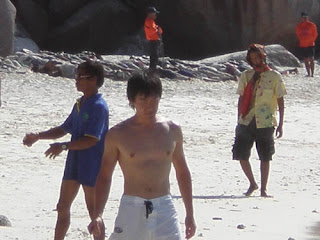 Paul Collier to United Nations, via the NY Times: Sack up, Ho!

“Well, take, for instance, the American biofuel scam (the ethanol subsidies that have diverted 30 percent of American corn away from the food supply) and the European ban on genetically modified seeds, imitated by Africa, have both contributed to Africa’s worsening food shortage. Where is the United Nations pressure for an end to these follies?

Why, also, did the United Nations not intervene militarily when the democratic government of Mauritania, another country in the bottom billion, was overthrown by a coup last month? Where is an alternative initiative to open international trade to poor countries now that the Doha round talks have collapsed? Above all, with a five-year-old commodities boom transferring wealth to some of the countries of the bottom billion, where are the international guidelines on taxation and investment that might help these countries convert earnings from exports of depleting minerals into productive assets like roads and schools?”

CNN has now put the East Timor story on its front page, under “world.” Except it’s not a coup attempt. It’s a “shooting.”

That it happened to be a “shooting” of the President and Prime Minister, and happened to be committed by “rebel troops” is obviously pure coincidence.

Oh, and Americans should “use extreme caution and limit movements as much as possible.” Glad we got that message out there! I know that I, for one, could never have figured that out on my own. Thanks, CNN! You’re a real pal.

The adolescent state of East Timor has become increasingly violent in its bids for the attention of older, more mature nations. The western media, wary of rewarding such bad behavior, continues to adhere to its policy of ignoring the outbursts.

P. S. There was a coup attempt this morning.