Well, we can add human rights workers to the long list of people Gambian President Yahya Jammeh has threatened to kill and/or destroy. (Included already are journalists and homosexuals and some refugees I met one time.)

Speaking before his departure for the U.N. General Assembly meeting last week, he bid a tender farewell to his nation, reminding them to empty the dishwasher and also not to foment civil unrest because: “I will kill anyone who wants to destabilize this country.”

And just in case that wasn’t clear, he added: “If you think that you can collaborate with so-called human rights defenders, and get away with it, you must be living in a dream world. I will kill you, and nothing will come out of it.”

Man, dude was a lot more humorous when he was yammering on about his magical healing powers. (Bet you didn’t know there’s a cure for AIDS after all; patients just need to go off their anti-retrovirals and drink a nice cup of dictator-soup.) Anyway, in memory of that kookier, less overtly murderous Jammeh, here’s an awesome old cartoon from afrol News (that’s Jammeh there on the left): 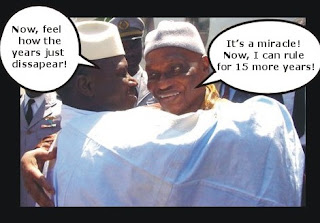