Thanks to Rob Crilly, I am no longer living in blissful ignorance of the existence of the Save Darfur thong (pictured below).

It was a happy life, one untroubled by questions like: “Really? This is how we signal our support for the victims of mass atrocities? By pasting their forlorn children’s faces on our crotches?” But that’s all over now. 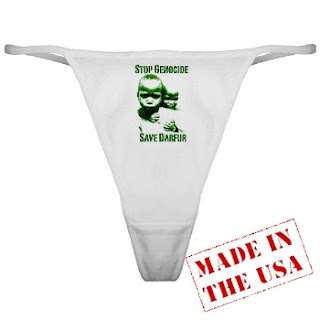 My only comfort is that now you’re all suffering along with me.