Things have gotten more interesting down in Guatemala since last I blogged on the subject. 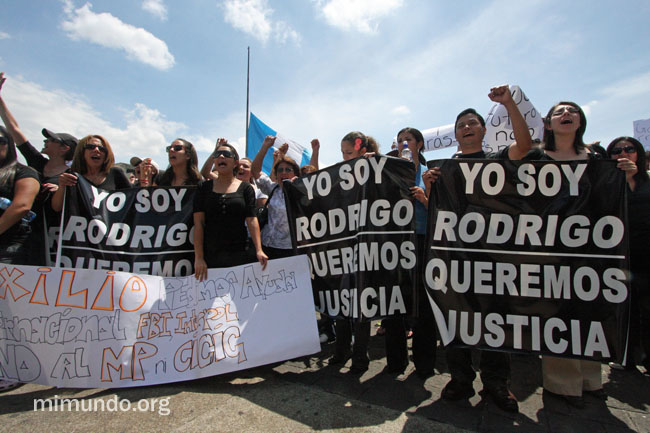 “I am Rodrigo, We Want Justice.” Photo courtesy of James Rodriguez, more at Mimundo.org.

In what the internets are referring to as “el efecto Streisand,” the government’s attempts to censor information about the Rosenberg assassination have served only to draw more attention to it, and increase public outrage. (The “Streisand Effect” phenomenon is explained here.) A quick guide to the developing situation:

– Jean Fernandez: Yesterday, Twitter user Jean Anleu Fernandez (Jeanfer) was arrested and imprisoned for a 96-character tweet about the scandal urging people to withdraw funds from the bank involved, Banrural. The government accused him of “inciting financial panic.” Tried, found guilty, and sentenced within a day, Fernandez was ordered detained until he could pay a fine of US $6,500 -far more than most Guatemalans earn in a year. Luckily, the internets are coming to the rescue: Jeanfer’s friends have started a blog about his situation, and are organizing people to help pay the fine and sign a petition asking for charges against him to be dropped. (I signed it. Perhaps you will too?) His family managed to borrow the money to get him out of prison, so now he is under house arrest.

– Street Vendors: Bootleg DVD copies of Rosenberg’s pre-assassination message are being sold on the streets of Guatemala, and apparently the government doesn’t like that very much. There have been reports of vendors being arrested, at least one of which seems to have been confirmed. According to the story on page 4 of this PDFd Prensa Libre, helpfully posted as part of Xeni Jardin’s amazing coverage of this over at Boing Boing, police in Villa Nueva arrested an assistant bus driver for selling copies of the Rosenberg video -sorry, i mean “publicly, or through any means of distribution, formally or directly inciting a rebellion or sedition, or giving instructions on how to create one.”

– Protests: Protests have erupted in Guatemala City in response to Rosenberg’s killing, and his video accusation against President Colom. Mimundo.org’s James Rodriguez writes:


“As a result of the crisis, two very different protests were carried out in the central park of Guatemala City. The first gathering brought thousands of demonstrators who angrily demand justice for Rosenberg’s death in addition to a resolution for the out-of-control violence in which Guatemalan society lives today. This first group, composed primarily by residents from the wealthier sectors, also demands the immediate resignation of President Colom.

Simultaneously, dozens of buses brought hundreds of organized people to show their support for President Colom in front of the Presidential Palace. These governmental sympathizers come primarily from low-income shantytowns, known as asentamientos, within the outskirts of Guatemala City. During a live CNN interview on Tuesday the 12th, President Colom admitted his UNE party had strong presence and support in such areas. These demonstrators claim that Colom’s government is victim of a movement seeking political instability. Despite the tensions among the groups, no violent confrontations occurred.”

I also highly recommend Xeni Jardin’s fantastic posts -lady knows herself some Guatemala, and she is doing an amazing job of aggregating information about this, and updating frequently.