Via Chris Blattman, we learned that Invisible Children (brief background of the organization: 3 kids go to Africa, make movie about child soldiers, show it to every college student on the planet) has launched a new film and campaign: “Abduct Yourself to Free the Abducted.” Um.

Chris posts a letter he wrote to Invisible Children’s Mission Director explaining his discomfort with the project. He makes the point that their work is (a) kind of obsessed with glorifying the filmmakers, (b) based on a creepy, White Man’s Burden-y savior complex, and (c) taking up resources that could be occupied by “intelligent advocacy.”

We completely agree and offer this photo of the three founders of Invisible Children in support of the “who is this about anyway?” critique: 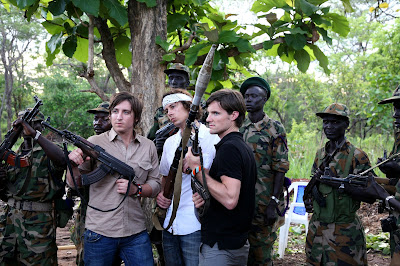 We also have a couple of related concerns:

First, organizations like Invisible Children not only take up resources that could be used to fund more intelligent advocacy, they take up rhetorical space that could be used to develop more intelligent advocacy. And yeah, this may seem like an absurdly academic point to raise when talking about a problem that is clearly crying out for pragmatic solutions, but, uh, the way we define problems is important. Really, really important. Choosing to simplistically define Congolese women as “The Raped” and Ugandan children as “The Abducted” constrains our ability to think creatively about the problems they face, and work with them to combat these problems.

Second, treating their problems as one-dimensional issues that can be solved by a handful of plucky college students armed only with the strength of their convictions and a video camera doesn’t help anyone. These gets back to something very simple and very smart that Alanna Shaikh wrote a few months ago:


“Bad development work is based on the idea that poor people have nothing. Something is better than nothing, right? So anything you give these poor people will be better than what they had before.”

By the same token, any old awareness advocacy you dream up doesn’t necessarily constitute “helping.” And while we’re on the subject of what does and doesn’t help, maybe don’t get photographed fondling big (former) rebel guns. Just saying.

*Photo taken by photographer and total rockstar Glenna Gordon on the Sudan-Congo border in April 2008. Team not-so-invisible-children poses with the SPLA… and their weapons.