Wow, things just took a turn for the weirder in the Congo. 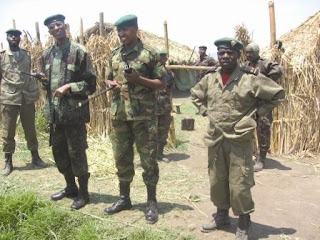 Remember last week when Bosco “The Terminator” Ntaganda maybe, possibly, kind of took over Laurent Nkunda’s CNDP, or at least part of it, but probably not? And then it seemed like Nkunda was in control and Ntaganda was about to experience a world of hurt?

Well, Ntaganda just held talks with Congolese Interior Minister Celestin Mboyo in Goma that culminated in the announcement of a ceasfire. Ntaganda’s forces (whose size no one appears to be sure of) will allegedly now join the DRC’s army to root out the remaining Hutu militias.

Apparently the Rwandan Army Chief of Staff, James Kabarebe (remember him?), was there too. No word on where Bettie the goat was in all of this, but if Nkunda has lost Rwanda’s support, things do not look good for him and his ability to continue terrorizing the eastern Congo.

*Photo is of Nkunda and Ntaganda together (with an unidentified shorter man) during happier times.