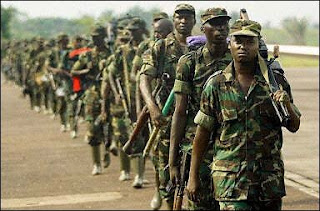 The wires are reporting that approximately 1500 Rwandan troops crossed into the eastern Congo this morning. They are there under a December 5, 2008 agreement to join the Congolese government in hunting down their on-again-off-again BFFs, the Forces Démocratiques de la Libération du Rwanda (FDLR).

Now, things haven’t gone so well the last few times Rwanda has come after the Hutu militias in the Kivus. (And that’s not even counting that time they started the First Congo War.)

But this time is different. This time, Rwanda is actually admitting that the troops are there.

I think we should all take a moment and applaud what is obviously a big step for the Rwandan government.

Alright, now we can go back to worrying that the presence of Rwandan soldiers will only serve to provoke another flare-up in Congo’s interminable civil war.

*Photo is an AFP image of Rwandan troops leaving a Congolese town that they totally didn’t invade back in 2002.