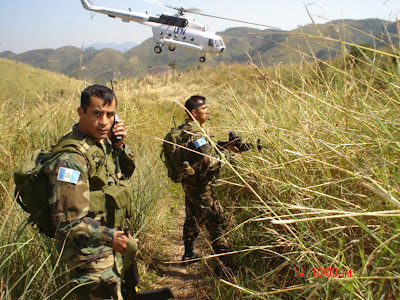 Guatemala has sent a group of Kaibile soldiers, the army’s “messengers of death,” to serve as peacekeepers in the DRC.

I do not think this is going to go well.

The Kaibiles are an “elite” group of Guatemalan soldiers who are put through Hell in the jungle in order to turn them into ruthless, relentless killing machines. (Note: not hyperbole. The training center is actually called hell.) Apparently their motto is “If I go forward, follow me. If I stop, urge me on. If I turn back, kill me.” As this guy points out, that outlook is not exactly in keeping with the traditional peacekeeping approach.

According to this information briefing, (issued by notable left-wing organization USCIS), the Kaibiles have a colorful history, including a massacre at Dos Erres in October of 1982:

“Dressed as guerrillas, the Kaibiles arrived in the hamlet at 2:30 a.m., December 6. They forced the inhabitants out of their homes, corralling the men in the schoolhouse and the women and children in the hamlet’s two churches. A subsequent search uncovered no sign of weapons or guerrilla propaganda. At 6 a.m., officers consulted superiors by radio, then informed the commandos they would be “vaccinating” the inhabitants after breakfast. In the early afternoon, the Kaibiles separated out the children, and began killing them. They bashed the smallest children’s heads against walls and trees, and killed the older ones with hammer blows to the head. Their bodies were dumped in a well. Next, the commandos interrogated the men and women one by one, then shot or bashed them with the hammer, and dumped them in the well. They raped women and girls, and ripped the fetuses out of pregnant women. The massacre continued throughout December 7. On the morning of December 8, as the Kaibiles were preparing to leave, another 15 persons, among them children, arrived in the hamlet. With the well already full, they took the newcomers to a location half an hour away, then shot all but two of them. To maintain the appearance of being a guerrilla column, they kept two teenage girls for the next few days, raping them repeatedly and finally strangling them once they were no longer useful”

So, it makes sense to send these guys to the DRC because…they are war-crimes experienced? They have shown their ability to do their jobs under high-pressure atrocity conditions? Because one of the qualities we look for in peacekeepers is “recent involvement with notorious Mexican drug cartels“?
Nice, guys. Real nice.

(For more about the Kaibiles, I refer you to this excellent Global Voices post by Renata Avila)