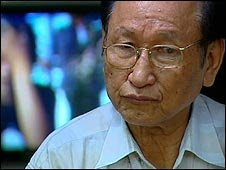 Photo Courtesy of the BBC
Did you know that John McCain spent five and a half years as a prisoner of war in Vietnam? Apparently at some sort of Hilton? Where they tortured him? No?
Yeah, I can see how you might have missed it. It’s too bad that McCain’s campaign never ever mentions it ever, not even a little bit.
But we are here to assist! That’s right, via our friends at the BBC, we bring you this interview with Tran Trong Duyet, McCain’s jailer during his time a Hoa Lo prison.
Duyet, described as a “sprightly retiree and amateur ballroom dancer,” has fond memories of the nights when he would summon McCain to his office and while away the time by arguing about the war. Duyet says he was intrigued by McCain’s “interesting accent,” and liked it when the imprisoned soldier corrected his speech.
Oh, and those pesky rumors about torture? About how McCain was subjected to such brutal treatment that he attempted suicide and was physically damaged forever? Not true, according to Duyet, who has absolutely no personal interest in covering up embarassing truths about torture! The Hanoi Hilton was awesome, according to our ballroom-dancing friend: “He did not tell the truth…But I can somehow sympathise with him. He lies to American voters in order to get their support for his presidential election.”
And wait, there’s more! Duyet, it turns out, is now a McCainiac. Apparently he was so impressed at McCain’s bravery and fortitude during his non-sessions of non-torture, and is so grateful that McCain helped to normalize relations between the U.S. and Vietnam, that he now considers him a friend and hopes that he will be successful in this election.

“McCain is my friend,” said 75-year-old Mr Duyet as he feeds the caged birds he now keeps in his garden in this coastal city. “If I was American, I would vote for him.”